A time to mourn 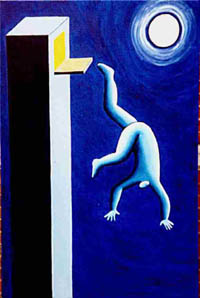 Cast out by Michele Petrone
Last night I attended a wake. It was meant to be a party to celebrate 8 years of Medical Humanities at UCL but there was an inevitable air of sadness: UCL's pioneering Centre for Medical Humanities is no longer being funded and has been forced to close. It is understatement to say this is a great shame. The Centre has served as a crucible for the discipline in the UK. Hundreds of healthcare professionals and patients have benefited from the excellent short courses run by the Centre. Magnificent, inspiring and well-organised conferences have invigorated the field. The BSc students lucky enough to undertake the varied and structured programme were last night effusive in their thanks, particularly to Debbie Kirklin and Heather Mitchell who have invested so much in the Centre over the past decade.

Although Medical Humanities at UCL was better integrated into medical education than most units, which operate on the margins with 'smash-'n-grab' forays into the curriculum, it was a soft target for the cash-strapped UCL. Situated in 'Primary Care and Population Sciences', one can imagine that it was tolerated rather than celebrated as being integral to its host department. The official excuse for closing the Centre down is 'Not enough research'. While I fully appreciate that research is a necessary and important part of academic life, an insistence on the primacy of research means that teaching is hugely undervalued. Universities are places where students come to seek enlightenment and training. Universities should not be factories for churning out papers in order to justify their existence.

The Medical Humanities Centre has, in fact, been incredibly productive over the years. Perhaps because it has so successfully fostered interdisciplinary collaboration, the Centre has not always received the credit for the publications of those whose activities the programme has nurtured. It is a pity this is not recognised.

Personally, I have been greatly inspired by the activities of the Centre for Medical Humanities. The short course in St Albans two years ago was a most memorable weekend. The Healing Humanities conference gave me the opportunity to meet the likes of Arthur Kleinman, Rafael Campo and John Fox. Artist Michele Petrone has become a good friend and comes and gives his life-enhancing workshop for our own students at Imperial every year. I also met Tamzin Cuming and Patricia Law on the short course, both of whom have also become friends and also collaborate on the Imperial course. Debbie Kirklin has been our external examiner and has been a fantastic sounding-board and mentor for our fledgling course.The loss of the Centre is a real blow to all of us who care about the humanitarian side of medicine. The closure ought to go down in history as a shortsighted decision, based on skewed priorities.
Posted by Unknown at 13:13

I'm with you on this closure being a short-sighted move. The 'human' side of medicine will soon disintegrate if we don't watch and learn with care.

How very sad. With any luck, the spirit of the centre will live on through the related faculties in other institutions. And what a silly reason to close the centre - although research is profitable, how can one expect such an outfit to generate any?

Hi
This is a great shame as I am intending to start a PhD in Medical Humanities/Fine art in October and was hoping that the centre would be able to help.
My research is aboput drawing , empathy and performance
Angela HodgsonTeall