The value of poetry in healthcare

Maurice Bernstein has started a discussion on the value of poetry in medicine in his Bioethics Discussion blog, prompted by this article in Community Ethics.
Posted by Unknown at 09:25 1 comment:

Considering the definition of anthropology - 'the scientific study of the origin, the behaviour, and the physical, social, and cultural development of humans' - it is strange that it is missing from teaching in most medical schools – human beings are the bread and butter of the medical profession. In Adam’s Navel, Michael Sims uses a variety of disciplines including medicine to explore the cultural and scientific significance of the human body, part by part. Everything, with a few exceptions, from the hair to the hands to the genitalia to the toes – is scrutinised for historical facts, figures and anecdotes.

It is an interesting idea. It would be nice to know the origin of the many beliefs we hold about our bodies – how did the eyes become 'the window to our souls'? Exactly what is it about breasts and bums that make them sexually attractive?

Sadly a promising concept fails in the hands of Sims. Adam’s Navel is part encyclopaedia, social history, journalism and textbook; and these various styles do not gel to form a cohesive read. Scientific terms – that are rarely explained – such as ‘hominid diaspora’ sit uneasily with wisecracks that only sometimes hit the spot. Sims flits from references to notable scientists such as Darwin and Desmond Morris to tales of Hollywood actresses Veronica Lake and Rita Hayworth. Of course, there is nothing wrong with this type of eclecticism – it just needs to be done well!
What could’ve been an enlightening and entertaining read unfortunately becomes a frustrating, long list of trivia. Here’s hoping the powers that be at medical school ignore Adam’s Navel if they ever consider throwing a bit of anthropology in with anatomy, neuroscience et al.
Posted by Unknown at 09:17 No comments: 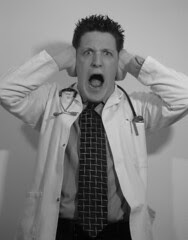 We're delighted to announce the first ever exhibition of art produced by Imperial College's Medical Humanities students. The work will be on view in the Blyth Gallery, 5th Floor, Sherfield Building, Imperial College London, from 29 June to 11 July 2005. The exhibition is open to the public.

The exhibition is a result of an assignment on the Medical Humanities taught option in the BSc year. Students produced a visual object that engaged with a theme covered in the course, e.g. clinical detachment, mortality, the medical gaze, popular perceptions of medicine. Each work is accompanied by a explanatory commentary. The standard was so impressive that we felt it merited an exhibition.

The photograph shown here is part of a piece by Jenny Eades which explores the doctor/patient relationship.
Posted by Unknown at 21:17 No comments:

'Breathing for a Living': book recommendation

I strongly recommend a book called ‘Breathing for a Living’ by Laura Rothenburg, Hyperion Books. It is memoir written by a cystic fibrosis sufferer who died while at Brown University. It is very well written in a style expected from a teenager/uni student and differs from most of the illness memoirs for a number of notable reasons. IT IS NOT A BOOK ABOUT CANCER! It is not a triumphant “I fought the disease and won” rant nor is it a “Terrible news: I’m going to die” book either. It is unique in that the author has known and been aware of her disease from the moment of consciousness and more importantly knows that she is going to have a short life in which she may die at any moment. Her writing documents her largely successful attempts to live a normal life of a teenager while experiencing repeated long term hospitalisations and latterly the agonising wait for and ultimately successful although futile heart/lung transplant. Most of her friends were also CF sufferers whom she had to cope with outliving. Although the book does have weaknesses (the eulogies at the end are rather American and don’t really do it for me and also her final chronic rejection resulting in her death is not mentioned at all) it is definitely worth a read. Furthermore the educational value of this book in teaching about CF is useful for any medical student in a way that we have cancer rammed down us the whole time!
Posted by Unknown at 22:50 No comments:

The blogtor is in

An interesting article has appeared in the LA Times on doctors writing blogs. How did I find out about this? Medlogs.com is a good way of keeping track of cybermedical news.
Posted by Unknown at 21:35 No comments:

Ricky Swallow's I-Man prototype interested me in the arts section of the Telegraph on Saturday: 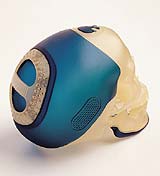 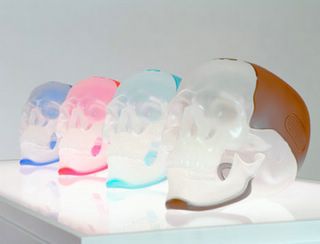 As an IPod owner I appreciate the vague satire; Apple has used a combination of aesthetics and technology to create not only a brand but a fashion label - clever marketing targeting not one but almost five senses (ISmell has a problematic name...). The skull brings together technology and medicine, not for therapy, but for a more sinister purpose. It reminds me of the skull of the terminator from the 1985 film.

The work is reviewed here, with some interesting comments on the significance of the skulls. Another comment by the curator of the original exhibition is here, relating to the idea that the piece represents the futility of attachment to material things.

Ricky Swallow's work from 2001 is featured at the Biennale in Venice this summer. There is further telegraph comment here.
Posted by aj at 18:26 4 comments:

The Guardian has give a very enthusiastic reception to architect Will Alsop's bright design of the new Institute of Cell and Molecular Sciences at Queen Mary's. There is an ongoing debate about the value we should put on making people 'feel better' in hospitals, beyond what drugs and medical intervention can do. Design is one aspect of this. Of course, it's not only patients that should feel better -- staff need a boost too. The photos of the building remind me of lollipop-loving garden-designer Diarmuid Gavin let loose on an interior, but no one could argue that it doesn't look cheerful.
Posted by Unknown at 12:00 No comments: 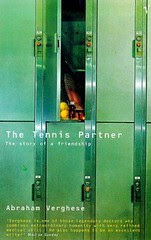 .
Nicely timed to coincide with the annual knockabout at Wimbledon, plus Abraham Verghese's participation in next month's AMH conference in Truro, we will be discussing Verghese's 'The Tennis Partner' on Tuesday 28 June, 7.30, Rm 311 in Mech. Eng. at Imperial College. If anyone has anything else of interest to do with medicine and culture ('show and tell' style), please bring it along!

We enjoyed watching Hitchcock's 'Spellbound' last week. It was fascinating to see how psychoanalysis was portrayed in the movie.
Posted by Unknown at 11:16 No comments:

Watching 'Make Me Normal', part of C4's 'Only Human' series gives a raw insight into various forms of autism.
The probing of the camera displayed not only how autistic children fail to understand and deal with their own emotions, but their intrinsic lack of understanding of other people's emotions too.
The camera selected several choice scenes; comfort in routine and fear in the unknown. At times I felt these very individual young adults were pigeon-holed; a relatively normal moment followed by a 'here we go again' scene, usually explained by a quirk - a new bus route or a wonky label. It's true that autistic children tend to absorb themselves in a particular area, but this documentary painted it more as an obsession than a field of expertise.
As one of the largest state schools for autistic children, the Spa School seemed very small through the eyes of the five or so teenagers portrayed in this documentary. I was reminded of 'The Titicut Follies', Wiseman's 1967 documentary revealing the inner workings of a psychiatric institution. This was not due to any barbaric practice, more an issue of consent. Bearing in mind these are not only children but 'impaired', one wonders the difficulties of filming in the Spa School.
The documentary emphasised the School's ethos that an autistic child has a 'need to know' of their condition, and the headmistress' belief this should be drummed in to her pupils. I felt this held them back in some respects; they could always blame their autism for their problems, making them permanent and unchangeable. It also increased dependence on the Spa School, highlighted by the emphasis on one pupil in particular soon to finish at the school and his incompetence at handling the world outside the school gates.
An interesting take was the examination of adolescent desires - for both emotional and sexual relationships. One girl craves the normality and everyday social pleasures taken for granted by the likes of us - having a drink in the pub, reciprocation of attraction; another boy hopes for a girlfriend and basic physical contact. This is an aspect not touched on in Mark Haddon's 'The Curious Incident of the Dog in the Night-Time' (review follows). It must be very depressing to envisage a life devoid of complex emotional relationships; sheltered, misunderstood and restricted.
The documentary made an attempt at explaining how one boy's loss of his mother affected his behaviour. It was touching to see the Headmistress attempt to bridge the emotional chasm but frustrating that she seemed unable to relate on his level - hiding in a toybox that prevented scrutiny and allowed more freedom of expression.
Perhaps we could use not patience and conditioning to our social norms, but compromise and integration with autistic children. Schools such as this clearly work hard and achieve much with their children, but the outside world should 'need to know' about autism just as much to reduce its fear and ignorance.

Christopher, an AspergerÂ’s sufferer, sets out on a voyage of self discovery, realisation and ultimately independence when he discovers his neighbourÂ’s dog speared with a pitchfork late one evening.

Haddon describes the delicate web linking exasperation, mistrust, adolescence, patience and the intrinsically restraining subsistence of autism. The reader is thrust into the midst of ChristopherÂ’s world: initially confusing, things begin to swim rapidly into focus. Soon we can anticipate what is around the corner, with Christopher still oblivious. It adds to the dramatic tension in the book, and makes each of ChristopherÂ’s comprehensions all the more pleasing and emotionally satisfying.

As the reader, we want Christopher to succeed. He is a hero, cocooned from the world around him, yet plunged into a bewildering and forbidding environment. He has his own hurdles and accomplishments, and eventually compromises.

In its original format, one might expect it to be a childÂ’s book. Its unique style, from the mathematical footnotes to the prime-numbered chapters immediately sets it apart, and provides mystique and intrigue for the reader.

Those expecting a book laden with difficult medical terminology will be surprised to encounter a narrative from the perspective of an autistic young man, perhaps a difficult theme, but one that Haddon achieves with aplomb.

This book stands out from the outset. Â‘The Curious IncidentÂ’ has wide appeal, to both the medical and lay - drama and disease in equal measure. It is both a murder mystery and an attempt at understanding a peculiar condition, an issue prevalent with the current furore surrounding the MMR vaccine debate.
Posted by aj at 22:44 1 comment:

Did you know that the average British person is prescribed about 14,000 pills in the course of a lifetime? A 'pill diary' forms part of an art installation in the Wellcome Gallery at the British Museum. The work is based on the medical narratives of a man and a woman. Read all about it here.
Posted by Unknown at 20:40 No comments: