Heartening new exhibition at the Wellcome

I thoroughly enjoyed visiting the new Wellcome galleries today. There are three exhibition spaces: a temporary space, 'Medicine Man' and 'Medicine Now'. The temporary exhibition space is currently devoted to the heart. Here you can see ancient Egyptian papyrus illustrating separate hieroglyphs for the physical heart and the spiritual one. There's an amazing pair of 17th century anatomical tables -- huge slabs of cedar wood on which is mounted actual venal and arterial material. Galen, da Vinci and Harvey all receive attention in the exhibition.
The middle section of the exhibition is devoted to technology, with explanations of the first heart transplant and a recently-retired heart/lung machine on display. An interesting portion looks at the symbolic power of the heart, including the sacrificial rituals of the Aztecs, and the concept of the 'sacred heart' as the seat of the soul. The art in the exhibition is fascinating, from traditional portraits to more contemporary work. I was particularly drawn to a large-scale work mounted on the wall called 'Le Coeur II' by Annette Messager. It consists of soft toys that have been 'operated on' so that they are reconstructed in new and disturbing ways. They are hung in the shape of a heart. The work sets up a tension between the apparently 'heartless' toys and the emotional resonance that soft toys automatically set up with the overtones of children and illness... It is very affective.
Other interesting objects include a piece of tattooed human skin (somehow more fascinating when it's detached from the rest of the body), a pig's heart stuck with nails and thorns recovered from a chimney in Somerset in the 19th century, and the dried heart of a whale.
There are various points in the gallery where you can listen to heart-themed songs. I like that it is not strictly chronologically arranged. The art and science permeate each other. Poems are displayed on X-rays. I am less sure about the 'porthole' type windows in the gallery that are eye-piercingly bright compared with the dim interior. Who needs to see Euston Road traffic anyway? The exhibition continues till 16 September.
I'll review the other exhibitions in the building soon.
Posted by Unknown at 20:54 No comments: 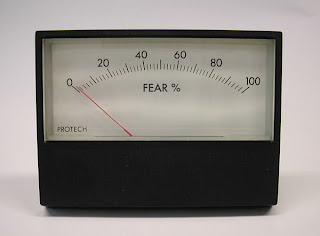 ...but it's not Tracey Emin. The Royal College of Art's 'Great Exhibition' takes place in a giant marquee in Hyde Park (technically Kensington Gardens) next to the Albert Memorial. This is really to be recommended. I was pleasantly surprised by the heady mix of aesthetically pleasing objects and the ingenuity evident in so many of the projects. There is a fair sprinkling of medicine-related design. I do wish I'd gone round the tent in an anti-clockwise direction because by the time I reached the concentration of medical design (in the industrial design engineering and design interactions section), I had gallery fatigue and didn't give them the attention they deserved. A second visit is in order. Sabine Fakete designed an intelli 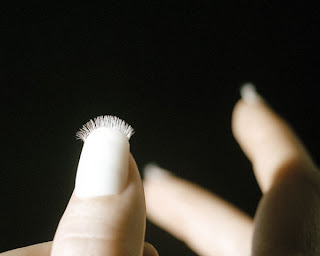 gent knee brace and easily changeable stoma bags. Michael Korn's work also focuses on the patient experience and includes a device to reduce needlestick injuries. I particularly liked Chris Hand's ideas about social sensors (pictured on the right). Susana Soares designed bushy fingernails for collecting DNA (pictured left) as part of her project which looked at what extra organs might prove useful in future.
Congratulations to all the RCA students for such innovative and exciting ideas. The Exhibition continues until 28 June.
Posted by Unknown at 13:31 6 comments:

I do so wish I could say something more positive about 'Signal', a film directed by Simon Tegala. I went with a friend to see it at the Prince Charles Cinema last week where its screening was accompanied by a lived performance of the score and, somewhat disastrously, a discussion with Dr Kevin Rigley, an immunologist who mentored Tegala.

The film, which was three years in the making but lasts just 15 minutes, is set in the British Library's iconic reading room. A cast of four female characters perform in the space -- some collecting parts of puzzles, others striding about or lying on the desks. A sparkly glimmery 'thing' appears which interacts somehow with the characters. Okay, so I didn't understand what was happening while watching the film, so I eagerly looked forward to being enlightened by the discussion. Rigley, who is badly in need of some science communication training, proceeded to give a totally baffling minilecture on how cancer cells recognise 'self' and 'non-self' which seemed to have absolutely nothing to do with what was depicted in the film.

Tegala, prompted by a question from the audience, did eventually explain which cells the 'characters' were meant to represent. The sparkly thing was the antigen or invader and the actresses were all different types of immune cells. Ideally, Rigley would have explained how these cells work in relation to the metaphor of the Reading Room as an organising system.

Tegala wanted to create a film that did not rely on a didactic explanation of the immune system to 'work' as art. I can sympathise with this -- we don't necessarily need everything spelled out for art to be a transformative experience. The problem is that the immune system already abounds with metaphors -- bioinformation, communication, the military metaphor... I was really looking forward to a new system of metaphor being introduced in the film that avoided these cliches and revealed a provocative and novel gaze. But by making our previous frames of reference irrelevant and providing no explanation for the events on screen, the audience was left baffled. It's a question of expectations: the billing promised 'a surreal exploration' -- but the surreal relies on what we know as 'normal' to make sense as a departure from the norm.

I think the film could still work if Tegala is willing to be more upfront about the symbolism. Librarians wear name badges -- it would be a huge help to know what kinds of cells the actors represent from the outset (all we get is a brief glimpse in the credits). In my opinion the musical soundtrack added little to the film. A commentary giving at least an introduction would enhance the narrative intelligibility. Rigley comes across as badly prepared and patronising ('If there's one thing I want you to understand...'). It's not too difficult to explain the rudiments of the immune system to a lay audience in relation to cells depicted in the film. He let down Tegala on the night.

The whole enterprise was clearly well intentioned and I hope it can be rescued. In its current form, though, it sadly seems somewhat pointless.
Posted by Unknown at 20:58 16 comments: 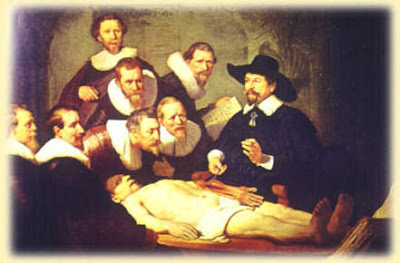 The National Gallery in London is about to open an exhibition called 'Dutch Portraits: the age of Rembrandt and Frans Hals'. The reason I'm flagging it up here is that it includes one of the most famous medical portraits of all time: The Anatomy Lesson of Professor Nicolaes Tulp. The odious showman anatomist Gunther von Hagens models himself on Tulp. You can read more about the painting here and here. The exhibition runs from 27 June to 16 September 2007.
Posted by Unknown at 20:44 1 comment:

Gawande gets even 'Better'

Every now and then, I come across an article or a book that I know is just going to be fantastic course material for our Medical Humanities course at Imperial. Reading Atul Gawande's book, Complications: a surgeon's notes on an imperfect science (reviewed by AJ on this blog here) was one of those 'Ah, brilliant' moments. Here is a book that sits on the interface of science and humanities in showing that the practice of medicine is vulnerable to all sorts of biases and unacknowledged 'human' factors. In a particularly eye-opening first chapter, Gawande explains how the 'learning curve', both for inexperienced junior doctors and for new procedures, exacts a toll. This sometimes adversely affects individuals (costing lives in some instances through initially low success rates) but it's for the greater good as skills develop as 'practice makes perfect'.
Some in the medical profession greeted the exposing of these weaknesses in Complications as a betrayal of the profession. But Gawande doesn't merely flag up weaknesses. In his new book, Better: a surgeon's notes on performance, he gives guidelines on learning from experience, good and bad, to improve the success of individual medical professionals but also medicine as a whole -- after all, as James Bryce said, medicine is 'the only profession that labours incessantly to destroy the reason for its own existence'. 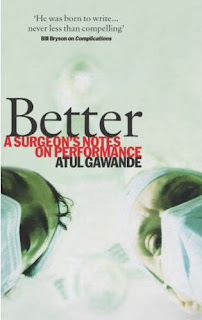 Gawande gave a talk at Imperial College on 4 June in which he highlighted some of the issues he explores in his book. He pointed out the discrepancy that exists in the public imagination about the quality of medical performance: it is generally expected to be more consistently good than the reality of the Bell curve in which only a few people or institutions operate in the 'excellence' range. Gawande is in favour of league tables (shock! horror!), because he believes it identifies the excellent few from whom we can then learn how to be better.
Gawande identified 'diligence' as an attribute of successful doctors: giving attention to detail to avoid errors. This includes surveillance for failure in a profession in which failure is effortless. He also said that doctors need a moral clarity about their mission. Yes, there are financial and time pressures, but professionals need to be innovative about finding ways round these obstacles to deliver good quality care. His third quality was 'bedside ingenuity': protocols only take you so far -- thinking of new solutions and interrogating failure is vital for improvement.
Although I have not yet had a chance to read it thoroughly, Better looks every bit as good as Complications. Gawande has an enviably accessible writing style, and important things to say. I was thrilled to have the opportunity to hear him speak in person. There is a podcast from NPR of Gawande discussing his book and reading from it here.
Posted by Unknown at 11:34 No comments: 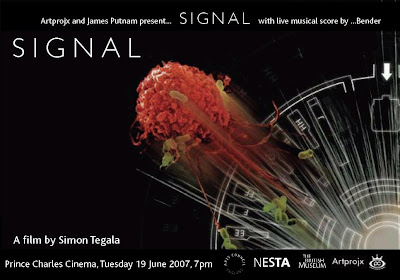 Tickets £7.50 book now
£5 for artists, curators and students
Simon Tegala’s new film, Signal transposes the model of the human immune system onto the architecture of the British Museum Round Reading Room and Great Court. The space becomes a metaphorical cell/organ/body. The four characters within the film play components of the immune system, operating within the space of the Museum, as do the immunological cells within our body. The film is a surreal exploration of m 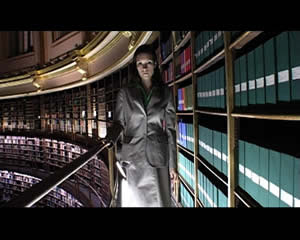 icro and macro spaces. The characters mirror the staff and clerks of the reading room, protecting and ordering the knowledge base of books that become analogous to the DNA within our cells. The film has been researched with immunologist, Dr. Kevin Rigley and supported by The Arts Council of England and NESTA.
The soundtrack to Signal was created by the band ... Bender who will play a special live set to accompany the event. Bender are:-Geraldine Swayne: vocals/ guitars/ accordion/ benjo/ piano/ bass/ viola. James Johnston (also a member of Nick Cave & The Bad Seeds): vocals/ guitars/ organ/ harmonica/ autoharp/ viola/ cello/ piano/bass. Steve Gullick: vocals/ guitars/ cello/ organ/ bass/ tonka.

The event will also include a discussion between artist Simon Tegala and Dr. Kevin Rigley, leading immunologist and consultant for Signal, chaired by James Putnam, curator and producer of Signal.
Posted by Unknown at 11:54 No comments:

The lecture is in Lecture Theatre 1, South Kensington campus, Imperial College London, SW7. Drop me a note at medhum@imperial.ac.uk if you can come so I can add you to the guest list. Everyone is welcome!
Posted by Unknown at 19:06 No comments: