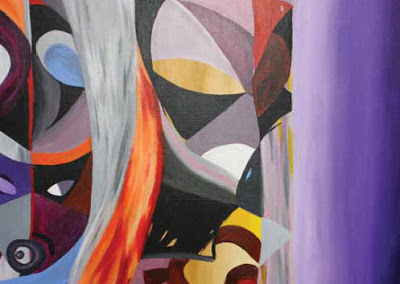 Everyone is invited to the opening of 'Artbeats', this year's Medical Humanities art exhibition. As part of the Medical Humanities specialist option at Imperial College London, students are encouraged to create an artwork. It can be in any medium, and on any topic related to medicine. This year, the exhibition will include fine art, photography, sculpture, film and even a few 'installations'.
The opening reception takes place on 6 May 2008 at 7.30 pm. Refreshments will be provided.
The exhibition is open to the public, free of charge, and runs until 22 May, in the Blyth Gallery, Level 5, Sherfield Building, Imperial College London (South Kensington campus).
The exhibition is curated by Mindy Lee. The publicity artwork this year is provided by Neil Shah, whose work is entitled 'Good Grief'.
For more information, e-mail Giskin Day.
Posted by Unknown at 18:35 1 comment:

The presigious journal Academic Medicine is looking for works of art to put on their covers. What a great opportunity for those working in the field. This is the deal:

Cover Art
These original works of art should be inspired by, but not necessarily representative of, a health care experience from any perspective-caregiver, student, or patient (for example, learning how to be a physician or scientist, caring for patients, exploring research questions, making a new discovery, being a research participant, teaching, or being cared for in a teaching hospital). The journal welcomes photography, sculpture, painting, textile work, and other visual media. Images may be cropped or resized to fit into the allotted cover space. Acceptance is contingent on the artist's signing an AAMC Artist Consent Form.

Artists will have the option of submitting a related Teaching and Learning Moment (TLM) as a narrative companion to the artwork, to explain the connection between the work and the "academic medicine experience". The related narrative should adhere to TLM submission guidelines Based on the individual strength of the artwork and the supporting TLM, we may occasionally choose to publish one without the other.

High-resolution TIFF files with a minimum of 300 dpi resolution are required at the time of submission. Images are at least 4 ¼" x 4 ¼" (with the ideal size being 4 ¼" x 4 ½" ) and are vertical or square, not horizontal. Images must be grayscale or CMYK. Submissions do not require an abstract.

More information on the journal's website: www.academicmedicine.org.
Posted by Unknown at 18:00 No comments:

Life Before Death was a very moving exhibition at the Wellcome Collection. It was a collection of black and white images capturing people just before and just after death. Journalist Beate Lakotta and photographer Walter Schels took images of 24 terminally ill patients and interviewed them whilst taking the first image trying to extract their thoughts about their inevitable death. The pictures were crisp photographs on a large scale with a black backdrop. Every blemish, scar and wrinkle was shown to us up close. This gave the viewer an unusual level of intimacy, usually only reserved for those close to the dying.

The first images seemed to encapsulate the subject’s views on death and reflected the worries and fears that they were facing. In contrast, the photographs taken after death seemed to exhibit the ways in which they had learnt to come to terms with their tragedy. For example, one lady when interviewed embodied an overwhelming resentment towards God and started to question his existence. Her after death portrait was the only one of the 24 to be taken inside a coffin, with a white, velvet background giving an almost holy feel to the image. It gave the impression she had accepted her fate and given herself over to a spiritual world.

Some of the more harrowing photographs were of terminally ill children. We found these slightly disturbing and considered the implications of showing these images of people who may have not yet understood the magnitude of their disease.

Untold: An Exploration of Identity in Old Age was a reflection of the Arts & Minds Project at the SW1 Gallery undertaken to illustrate the value of art as a supportive therapy for the elderly. On entering you were confronted by three etchings conveying the mental experience of a patient with dementia. Artistically we thought they were fantastic, but it was hard to relate them to the disease. Moving on, Deborah Padfield’s collection of photgraphs of the elderly depicted them sewn to other people or objects. We thought this demonstrated that they were tied to what they loved and found it warming that they had something to hold onto.

The next part of the exhibition embodied the contribution of the elderly subjects. You were able to sit down in an installation of a typical room in a care home and listen to music made by Fraser Trainer and Peter Whyman from the instruction of the subjects. These inspirational pieces showed an incredible freedom for the residents to express themselves in ways they would not normally be able to. A video accompanied this showing how the residents used hand signals to instruct the musicians what to play, therefore creating “improvised” music.

Finally, we ended on a collection of iconic images of London traced and painted from photographs all of which was done by residents. Some of the paintings had a child-like ethos, which could reflect the way that society views the elderly in the same way they view children; in constant need of care and attention; patronising and demeaning.

By coincidence, on the day we visited the exhibition the residents of one of the centers involved in the project had come in to view the fruits of their labour. A sense of pride and completion graced their faces representing a renewed sense of worth that this project had given to them.

Both of these exhibitions were very touching and allowed us to reflect more about the plights of the elderly and terminally ill.

Medicine and Narration in the Eighteenth Century

There is an interesting programme of talks in Oxford on Friday 18 April 2008 at Maison Française d’Oxford, 2-10 Norham Road, Oxford, OX2 6SE, starting at 9.45 am. Enquiries to maison@herald.ox.ac.uk.
Posted by Unknown at 16:09 1 comment: