The Association of Surgeons of Great Britain and Ireland, the ASGBI, is not known for its contribution to medical humanities. Things may change however in this most serious-minded and conservative of organisations. First the "wives' social programme" was changed to the "accompanying persons' social programme" at its Annual General Meeting, which is taking place this year at the old Manchester Central station now re-done as a conference centre. It used to be part scientific update (if you got round to going into the lectures), or part/all a nice social jolly for all the old boys to meet up and boast about their prowess this year. It continues in this vein, with its annual golf competition a prized prize, and the Annual Dinner a famed spot for networking and observing well-known figures undone by the old medical school poison. However, winds of change are slowly whispering. In 2004 an art and photographic display was introduced. By surgeons and their partners. Of course, being surgeons, they had to have a competition. I don't know what happened at that one, but it was dropped for a year. However, the photography competition was reinstated in 06 with a poetry competition which is on again this year.
The winning entries in the poetry were of a rather familiar joke variety, the kind of joke my 4 year old would appreciate, the "Colonoscopy Anthem" and the "Ode to a Pitts S2A"
http://www.asgbi.org.uk/edinburgh/pages/poetrycomp.htm
However, the winning photograph was poignant and beautiful
http://www.asgbi.org.uk/edinburgh/images/siteimages/waitformelarge.jpg
so there is some hope that the poetry will get taken more seriously in time. Perhaps photography is just less embarrassing a prize to win.
Sadly, it is only open to Members of the ASGBI or associated societies, or anyone attending the Annual Meeting (at a cost of approx £200 a day. So fairly exclusive, then) - but it is there. If you are interested and fulfil the above requirements, the closing date is Monday. It would be nice if they opened it to medical students as well. Perhaps the quality of entry would improve...
http://www.asgbi.org.uk/manchester/pages/competitions/photographic.htm
and the poetry http://www.asgbi.org.uk/manchester/pages/competitions/poetry.htm
There is a serious category of entry and a humourous one. I hope for some inspiration over the weekend. Perhaps one should write it first before deciding whether it is funny, or leave that to the judges (who are they? what poetry experts have they hidden in their ranks?) Maybe that is why they have said categories. They wish the author to make that judgement and save them from the excruciating situation of awarding the humourous prize to a serious entrant.

I wonder how many Annual General Meetings we are away from having this collection of surgeons hear some seriously well-written poetry to leaven their/our diet of acrid coffee, hangovers and information overload? Mr Abse, fancy a trip to Manchester?
Posted by the resident colonist at 11:45 2 comments: 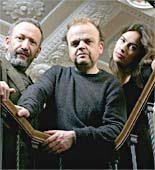 As a bed-wetting, traumatised child, Adolf Hitler was referred by his provincial doctor to a young psychologist specialising in children's traumas in Vienna. His name was Sigmund Freud. Hitler never went. But how different might the history of the 20th century have been if he had?
Laurence Marks and Maurice Gran present this exciting study of the relationship that develops between Freud, his daughter, Anna, and the 20-year-old Hitler. Toby Jones plays Adolf Hitler, with Alan Corduner as Freud and Sophie Winkleman as Anna Freud.

You can listen on Radio 4 at 2.30pm tomorrow
Posted by Beth Williamson at 11:06 No comments:

A friend of mine found this pair of poems in a book on Comm Skills. You'll probably know the first, but the second is obviously inspired by the government's views on how the NHS should be: modern, multi-disciplinary and, most importantly, meeting targets.

WH Auden:
Give me a doctor partridge plump,
Short in the leg and broad in the rump,
An endomorph with gentle hands,
Who'll never make absurd demands,
That I abandon all my vices,
Or pull a long face in a crisis,
But with a twinkle in his eye,
Will tell me that I have to die.

Response by Marie Campkin:
Give me a doctor underweight,
Computerised and up to date,
A businessman who understands,
Accountancy and target bands.
Who demonstrates sincere devotion
To audit and to health promotion -
But when my outlook's for the worse
Refers me to the practice nurse.
Posted by greg at 12:44 1 comment:

The Lancet is running a short story competition for which medicine should be the inspiration. More details here. The deadline is 10 May, and the recommended length is 2,500 words. If you don't get your story published, we'd be happy to feature your entry right here on our blog!
Posted by Unknown at 19:19 No comments: 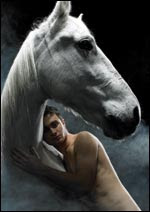 last night I went to see the highly publicised play 'Equus' currently showing at the Gielgud Theater in London. The play is not for the fainthearted. It concerns the case of a teenage boy, Alan Strang, who savagely and inexplicably blinds six horses. He is sent to the psychiatrist Martin Dysart (widely thought to be based on RD Laing). Dysart is a frustrated Hellenist, dreaming of Ancient Greece and increasingly disillusioned with psychiatry. As Alan gradually reveals the lead-up to the shocking attack on the horses, it becomes that a bewildering conflation of consumerism, iconology, upbringing and a need to worship are implicated in Strang's actions. Dysart envies Strang's passion, and ends up denouncing a profession which seeks to 'cure' emotional extremes of which Dysart is in awe. It's a dark play, but also very funny in places. More ideas about the depiction of psychiatry in the play can be read here.

Much has been made of Daniel Radcliffe (famous for playing Harry Potter) stripping off and (very nearly) simulating sex. Not to mention him smoking on stage! But what about Radcliffe's acting ability? It's good, but not great. He veers between obstreperous teenager and vulnerable kid with not much to offer in between. I think he should have had long hair to lose the clean-cut schoolboy look. Also, his 'stare' is central to the play. Sitting up in the Grand Circle, this was lost on us -- he needed to use his head and neck more to emphasise his gaze. Yet he coped very well with the physically and mentally demanding second act. Richard Griffiths is outstanding as Dysart. The horses, played by dancers in masks and on stilt-like hooves, were excellent. They showed just the right combination of majesty and menace. For anyone with an interest in psychiatry, the play is well worth the ticket price.
Posted by Unknown at 18:27 3 comments:

Thanks to Ruvandhi for this:

The BBC website carries a story regarding women's perceptions of their childbirth experiences within the NHS. Half the three thousand women said they were left alone during labour, prompting us to ask why on earth weren't they accompanied by a medical student? A perfect opportunity to provide support and company, as well as learning and taking some of the burden from midwives, whose numbers the same article claims will need to increase to the tune of ten thousand over the next few years.
Still, this doesn't allow for women not wanting a medical student present during their labour, some of the issues are discussed in this previous post.
Posted by aj at 19:22 1 comment:

You may remember me telling you about making new plays with almost a dozen surgeons - it's the first time professional London theatre has attempted such a collaboration. We open at The Old Operating Theatre, Britain's oldest operating theatre, in April. In the face of pressure from funders to make more art from science, we've decided to turn our venture on its head and launch with a debate at The Royal College of Surgeons (followed by a drinks party, natch) at 6.45 pm, 22nd March.

Aren't Science and Art different but equal? Does adding them up only dumb them down? Can the new medium of 'sci-art' produce high art or good science or weaklings that are neither? Author Don McRae ('Every Second Counts' is the story of the race for the first heart transplant), scientific playwright Jack Klaff, TLS editor Michael Caines and philospher Hilary Lawson will argue against the public, surgeons and artists. If you fancy adding your brain to the mix, get tickets at www.metalandbone.org (EVENTS).
Posted by Metal and Bone at 22:56 No comments:

The Medical Humanities Society is Imperial College School of Medicine's only book and film club. Although not a Union Club, we are recognised by the Medic’s Clubs and Socs Committee. We are an informal free book and film club that meets monthly to watch films and discuss books of medical relevance. We aim to provide access to Medical Humanities for all, whether medical or not.
An AGM will be held on Thursday 5th April along with the Medical Humanities Society’s next film showing, The Motorcycle Diaries. The meeting will be room S303A in the new Humanities area, , Imperial College London, South Kensington Campus, at 7:30 pm. Refreshments will be provided.
We will decide next year’s committee and any suggestions you have for the Society – please come along!
Posted by aj at 17:54 1 comment:

An ESRC-funded study called Bodies Online looked at how people access health information on the Internet. The story was covered by BBC News online.
The study found that participants developed trust in web material over several stages and quickly dismissed poorly designed sites, sites with ads and general portals. While people looked for credible and impartial information, they were also highly influenced by personal stories to which they could relate.
In common with other studies, the participants used the Internet to prepare for visits to their GP. Yet the results also suggested that legitimate sources of information - such as NHS sites - were less likely to be used because they were hard to access and lacked input from others sharing similar concerns.
As the Internet is not going to go away, and is likely to be accessed increasingly by those seeking medical advice, I believe this report underlines the importance of providing health information in an understandable way as well as in specialist terms - putting the humanity into medicine, so to speak.
Posted by Eddie W at 15:46 No comments:

On Saturday 17th March there is an organised march in protest of the national shortfall of jobs for doctors at ST (Specialist Training) level orchestrated by the new application system 'Modernising Medical Careers'.

There has been much debate about the system on sites such as Doctors.net and Facebook by medical students and doctors alike. There has also been confusion regarding the aim of the march - with some believing the march is about the way doctors apply for jobs (via MTAS, the Medical Training Application System), rather than being about the shortage of jobs for those entering Specialist Training.

You can read this article in Medical Student newspaper, written by a representative from RemedyUK that explains the problems - namely that for 28,000 doctors there are only 22,000 jobs, and with each doctor costing £250,000 to train, it represents a cost of £1.5 billion in wasted medical education, not to mention the personal issues for those involved.

This schematic from the MMC website shows the training routes for doctors. More information can be found here.