LivingTV is launching yet another doctordrama on Monday night at 10 pm. If the amount spent on advertising it is anything to go by, it might be worth watching. Grey's Anatomy follows the lives of five surgical interns in their first year of being 'proper doctors'. So far, so predictable. The synoposis reads a bit like a tame version of House of God, which is November's Purple Coat Club book to read, by the way.

I can't resist a plug here for Amazon's new DVD rental by post service. For a mere £7.99 a month you can rent 4 DVDs (alternative plans are available for 3 or 6 DVDs a month). More details here. I have really enjoyed watching Dennis Potter's TV 'movie' The Singing Detective this month. If you're interested in dermatology or psychiatry, I particularly recommend it. The three-disc set comes with a director's commentary which is very revealing about the way it was made.
Posted by Unknown at 14:09 4 comments:

On Tuesday evening, we will be watching the acclaimed film 'Now, Voyager', starring Bette Davis, which affords an insight into psychiatry in the middle of the previous century. We start at 7.30 pm in Rm 311, Mech Eng, at Imperial College London. Everyone is welcome but if you don't have access to the building, you need to contact me to make arrangements to be let in. Dr Siv Jansson will be our guest.

UPDATE: Change of plan... Neither Yael nor Siv can make it, so we will be watching 'Brittania Hospital' instead, and 'Now, Voyager' next month. Apologies for last-minute changes.
Posted by Unknown at 13:46 No comments:

An essential item for any medical student and an integral part of the white coat, the Oxford Handbook of Clinical Specialties, a.k.a the 'Salt and Vinegar' (it has a blue cover, as opposed to the 'Cheese and Onion' - green and yellow) is indispensable in the fifth year of medical school.

Having embarked on this penultimate year of medical school myself, and vainly trying to cut the mustard as a discerning medic, I ordered this book.

Factual and to the point, it provides an at-a-glance summary for the features and management of medical conditions, plus it fits in your pocket.

However, what I like most about this book are the humanities-inspired passages that intersperse the chapters. They remind us all what we are doing and why, without losing sight of the patient before us: that the collection of systems we are interested in makes up a person.

I haven't yet discovered all the passages and intend not to: finding them by chance is a more surprising and satisfying endeavour. My favourite so far prefaces the orthopaedic chapter and tells of the surgeon who labels his patients 'hags', and sets off irately down the ward, abandoning his humanity with every step, his fury arising from his realisation that he is letting his humanity go. The author of the chapter comes to their own realisation when exhaustedly collapsing onto a patient's bed: when the patient moves over to make room, they grasp the notion that the hags must make room for the doctor, and vice versa - 'they are all in the same bed'.

What a pleasure to know such an influential book contains a quick reference guide to humanity as well as medicine. It prides itself on multidisciplinary learning, which it achieves to a high degree.
Posted by aj at 17:00 2 comments: 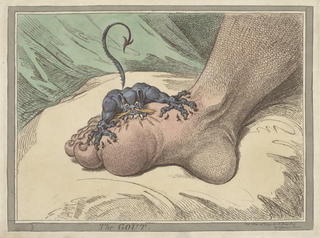 Unfortunately my current rotation (musculoskeletal - a.k.a rheumatology, dermatology and orthopaedics) doesn't allow me much time to watch the news and keep abreast of bloggable items, but this morsel in today's lecture interested me.

This depiction of gout, a disease in which high levels of uric acid are deposited into joints, is an historic perception of illness. Uric acid is very insoluble and so rapidly crystallises in the synovium. It most commonly affects the big toe and ankle, and presents acutely with a hot, swollen and tender joint.

This idea of a malicious, malevolent creature feasting parasitically from the body is a common take on ill health and a convenient metaphor, especially when disease is poorly understood. In this case, germs are not involved, but it's easier to blame a mischevious creature for the problem rather than your alcohol intake...!
Posted by aj at 16:32 2 comments:

Jenny Rattray at the UMO recommended House, currently showing on Channel 5 at 22.00 on Thursdays, and I finally got round to watching a couple of episodes. It completely bucks the trend of most modern hospital dramas towards realism and goes for idealism instead. The show's main draw is 'Dr House', played intriguingly against type by Hugh Laurie, with a gravelly American accent, a permanent 6 o'clock shadow, a limp and an attitude problem. House has no regard for ethics or hospital procedures and he frequently places his patients' lives at risk, but he always works out the correct diagnosis in the end. This (at least in the two most recent episodes) was down to Sherlock Holme's type deductional reasoning based on bad reactions to experimental medications and taking a chance on the less obvious diagnosis. House has three sidekicks. Curiously, none of them seems to have a caseload of more than the single patient featured in each episode. It's supposed to be set in a teaching hospital, yet the environment looks more like a law firm that's been featured in an episode of 'House Doctor' (sorreee!) and the patients seem all to have private rooms. There isn't a ward (or a nurse for that matter) in sight. House has a spacious office that looks like a board room. Are you sure this isn't science fiction?

Okay, so reality doesn't intrude on the plot circumstances, but what really interests me is why the show remains so watchable when the vast majority of viewers (with no medical education, myself included) have no conceivable chance of 'solving the mystery' ahead of House. The fun of reading an Agatha Christie novel or others in the detective genre (of which House is a medical visual example) is that you get to have a shot at working out whodunnit. With House you have no chance of second guessing the obscure diagnosis. Dr House is blatantly far more interested in the diagnostic puzzle than in the patient, and is thus the antithesis of your caring, communicating doctor. Yet, someone that determined to provide a definitive answer to a complicated set of symptoms and circumstances is hugely compelling as a doctor. Uncertaintly is a deep-seated cause of anxiety and I think the satisfactory resolution aspect is what contributes, I think, to making House compelling viewing. It would be interesting to hear comments on the show from a medical point of view.

As a quick aside, starting tonight on BBC2 at 19.35 (repeated on BBC4 at midnight on Monday) is The Guinea Pig Club, a drinking club for disfigured WW2 pilots. It's based on a book, The Reconstructions of Warriors, by Imperial College's Humanities Research Fellow, Emily Mayhew, who has a special interest in the history of plastic surgery. She won an award for her work on the series.
Posted by Unknown at 14:09 3 comments:

If, like me, you wish you could be in Edinburgh, there is some cultural compensation in the form of the Portobello Film Festival, kindly brought to my attention by Will Melia. It's conveniently situated for Imperial medical students and it's free.

Suzy Wilson, who runs our movement workshop on the Imperial medical humanities course, is artistic director of an innovative theatre company, Clod Ensemble. They are off to Edinburgh soon but there is a 'preview' in Shoreditch on Thursday 18 August. Performances at 7 pm and 9 pm at St John's Church, Pitfield St, N1, and tickets cost only £2.50. E-mail Roxie at the Shoreditch Trust to book.
Posted by Unknown at 17:46 No comments:

Interesting story on the BBC website today on how we can better judge risk. The 'social amplification of risk' (those factors which are difficult to quantify but have a significant impact on how we perceive risk) has been neglected in research -- it's good to see these matters being taken seriously.
Posted by Unknown at 09:03 No comments: