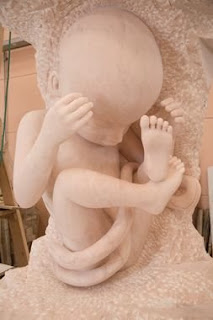 At White Cube Mason's Yard Marc Quinn presents 'Evolution' a show that should be of interest to those reading this blog. The blurb from White Cube puts it like this: "a major new installation featuring a series of nine monumental sculptures, in fleshy pink marble, that represent the growth of the human embryo and foetus during its gestation. Quinn was prompted to make these works after witnessing the way many viewers reacted with repulsion to his series of figurative sculptures depicting people who are missing arms and legs. He felt the need to confront people with a direct portrayal of their own strange beginnings, the unsettling and barely recognisable shape taken by human life before birth. Developed from scans and factual photographs, these sculptures are biologically accurate but also bring to mind topical issues such as genetics and the manipulation of DNA. Each embryo or foetus appears as if it is emerging out of its raw material before our eyes, struggling in the manner of Michelangelo's Dying Slaves, sculpted in the 1520s for Pope Julius II's tomb in the Vatican. (A point Quinn emphasises by including a huge lump of untouched marble at one end of the gallery.) 'Evolution' illuminates the magical nature of human development and celebrates the emergence of life from matter, making visible what is hidden." Sounds amazing. If you manage to see it do post your thoughts here for everyone else.

This is the provisional schedule for Purple Coat Club meetings for the next few months. We meet at Imperial College's South Kensington campus, in the evenings (usually 8 pm). Meetings are free and open to anyone (not just students from Imperial). To be put on the mailing list to receive a reminder e-mail shortly before each event with further details of time and place, please e-mail me.

7 February Sicko
The inimitable Michael Moore takes on the American health system in this acclaimed documentary. Apparently this film will make you feel much better about the NHS – and let’s face it, we could all do with a bit of that!

6 March The Barbarian Invasions
This Quebecan film won the audience’s favourite award at Cannes, along with a host of other gongs. It is billed as a quirky comedy/drama about a father and son who re-explore their relationships, and society, in the face of a crisis.

3 April Away from her
Based on Alice Munro’s short story, ‘The bear that came over the mountain’, this film about Alzheimer’s stars Julie Christie. It’s received amazing reviews.

8 May Donnie Darko
This genre-defying, highly acclaimed, cult movie stars Jake Gyllenhall as a disturbed teenager. According to the comments on Amazon, it has multiple layers of meaning, so it’s an ideal movie for Purple Coat Club – we can all contribute our interpretations and hopefully collaboratively make some sense of it.

5 June Black
Described as an Indian version of the Helen Keller story, this is one of the reviews on Internet Movie Database: ‘Few are the number of viewers who could experience this film and not leave better people, if only because it succeeds in allowing us to recognize the value of caring for one another as the greatest triumph, if not the most important ingredient in all of our other successes as a species.’ Expect great cinematography and wonderful performances.

3 July Rainman
‘Rainman’ has got to be one of the most influential movies ever – it brought autism to public attention, and also delivered career highlights for both Tom Cruise and Dustin Hoffman. Twenty years after it was made, how does it shape up against what we now know of autism?

7 August Body Art by AS Byatt
This is a fabulously provocative short story which explores the boundaries of medical professionalism, patienthood and art.

4 September Diving Bell and the Butterfly
Can the movie ever live up to the brilliance of the book? Only one way to find out…

2 October The Painted Veil
It’s not often that a starring role is taken by a bacteriologist. Based on a story by Somerset Maugham, this is a hauntingly beautiful movie about love in the time of cholera.
Posted by Unknown at 20:12 No comments:

How tired are you? 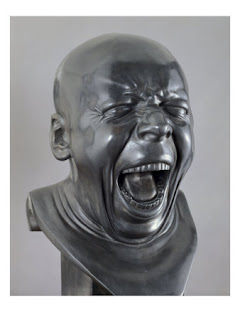 The Wellcome Collection currently has an exhibition on Sleeping and Dreaming. You can test your tiredness level in this 2-minute online psychometric test.
Posted by Unknown at 11:01 No comments:

'The Highest Tide' by Jim Lynch 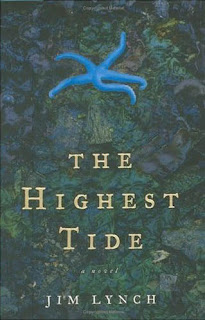 Although the The Highest Tide is not strictly a medically themed book, I can't resist putting in a good word for it. I think it will interest anyone fascinated by biology. The story is narrated by 13-year-old Miles, a beachcomber extraordinaire and walking encyclopaedia on marine biology. In a less deft hands, Miles would come across as an insufferable smart alec, but Lynch gives him just the right amount of self-depreciation to win you over.

Miles starts discovering creatures that do not normally belong in Pugit Sound, prompting a media invasion. When he's not finding giant squid, prehistoric fish and washed-up Japanese street signs, Miles is saving lives -- he rescues his unlikely friend Phellps who gets stuck on the mudflats, and gives a labrador dog the kiss of life. His best friend is an ageing psychic Florence, who suffers from cortical basal ganglion degeneration. The girl-next-door, with whom Miles is besotted, has bipolar disorder. Neither of these conditions is dealt with in any depth, but the practical implications of both and the impact they have on people around them is explored with finesse.

Miles reveres Rachel Carson (her book The Sea Around Us gets a well deserved raised profile here), and there is a definite eco subtext, although this is more hammerhead than sledgehammer. The Highest Tide is reminiscent of Gerald Durrell's My Family and Other Animals and of one of my all-time favourite, John Steinbeck's Cannery Row. The descriptions of sea life are lyrical, the characters as vivid as the sea stars that Miles finds. I also like that the book is sciency but not at the expense of a touch of magic.
Posted by Unknown at 12:04 No comments: 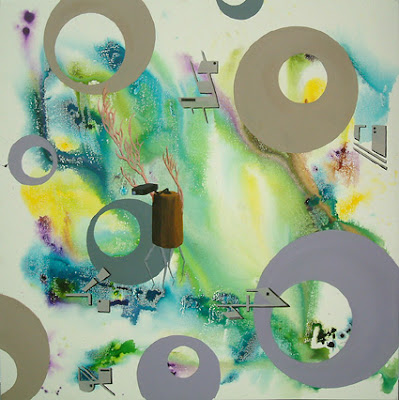 Simon Gamble is an artist with a background in cancer research at Imperial College London. His work makes analogies between nature and anatomy, and also makes us think about the way that so much of technology takes its cue from biological forms.
He says, "In my career I have tried to balance and integrate my science training with my love for art and all artistic expression. This is something I aim to develop further, in order to explore the creative side of science, the science behind art, and the beauty and fascination of the living world and it's portrayal in art."
His first solo exhibition is about to open at the Knapp Gallery, Regent's College (map here). There is a private view on Friday 18 January, 6 to 9 pm, otherwise best phone the Conference Centre on 020 7487 7540 in advance as the venue is sometimes used for meetings.
Posted by Unknown at 09:38 No comments: 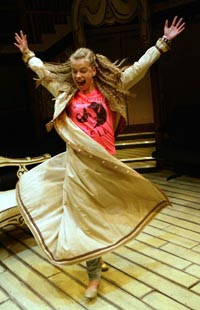 The writer and diarist Fanny Burney enjoyed little success in her lifetime, mainly because her father discouraged her from publishing, believing it to be unfitting to a lady's reputation. So, although her play, 'The Wife Hater', was written over 200 years ago, it is only now being staged.
Burney is of interest to those of us involved in literature and medicine because her harrowing account of undergoing a mastectomy without an anaesthetic is believed to be one of the first examples of 'pathography', or biographical writing of the illness experience. The account is fascinating, not only because of its vivid description, but because of the implications the lack of anaesthesia had for communication over the makeshift operating table. Not wishing to distress his patient any further, Baron Larrey (Napoleon's surgeon) and the attending team of doctors used sign language to indicate the extent of the excision:
'... silence the most profound ensued, which lasted for some minutes, during which, I imagine, they took their orders by signs, & made their examination - Oh what a horrible suspension! - I did not breathe - & M. Dubois tried vainly to find any pulse. This pause, at length, was broken by Dr Larry, who, in a voice of solemn melancholy, said 'Qui me tiendra ce sein? (“Who will hold the centre?”) - ' No one answered; at least not verbally; but this aroused me from my passively submissive state, for I feared they imagined the whole breast infected - feared it too justly, - for, again through the Cambric, I saw the hand of M. Dubois held up, while his forefinger first described a straight line from top to bottom of the breast, secondly a Cross, & thirdly a Circle; intimating that the WHOLE was to be taken off.'
The whole account speaks to contemporary ideas about 'distress management' which are still relevant today.
The play, a subversive romantic comedy, has garnered good reviews and is on at the Orange Tree Theatre in Richmond, until 2 February.
Posted by Unknown at 20:11 6 comments: 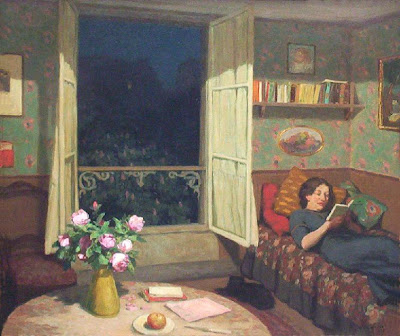 The idea that literature can make us emotionally and physically stronger goes back to Plato. But now book groups are proving that Shakespeare can be as beneficial as self-help guides. Blake Morrison's article in Saturday's Guardian investigates the rise of bibliotherapy - the reading cure. Check it out here.
Posted by Beth Williamson at 14:22 1 comment: 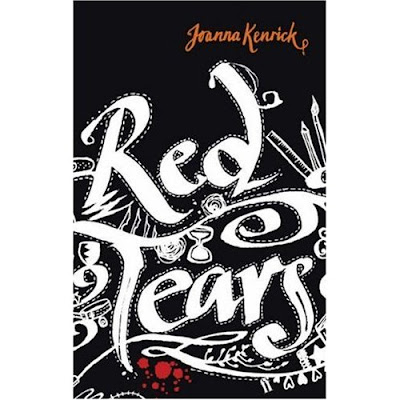 Red Tears by Joanna Kenrick is a stunning novel aimed at teenagers, but worth reading whatever age you are. Kenrick's dramatization of self-harm is shocking; what is most shocking is how ordinary and seemingly common-place it is. Self-harm is not something I have any experience of in any way. I came across the book whilst browsing on Amazon and thought perhaps it was time my teenage daughter read something more challenging and thought provoking than her usual choice of reading material. I thought I'd read it first as it's a pretty heavy subject to foist upon a thirteen year old who, lets face it, has led a rather sheltered life thus far. I needn't have worried, however, as Kenrick's treatment is sensitive, challenging and responsible all at once. As the Red Tears website suggests, its 'a novel of pain, sadness and hope'. As a reader and a parent I found the anguish experienced by the main character quite difficult to shoulder at times. But it is, above all, a hopeful book and I think I understand a little more about what lies behind self-harm than I did before so that's very positive. I didn't realise it is an addictive behaviour. Neither did I appreciate the ideas of control and caring which play out so strongly in self-harming. If readers comments on the website are anything to go by then the book is helpful to those caught up self-harm themselves, even helping some stop which is quite an achievement. It certainly helped my understanding. I don't know what my 13 year old daughter will make of it, but I'll let you know. Red Tears isn't Kenrick's only novel and, from what I can see, she's an author worth supporting, apart from being relevant and a damn good read besides.
Posted by Beth Williamson at 19:15 2 comments: