Posted on behalf of Lauren Trisk:

Just wanted to let you know about an evening of theatre and debate I am organising at the Royal Society of Medicine (1 Wimpole Street, W1G 0AE) on Friday 10th October (flyer attached). 'Cancer Tales', two short plays about women and their journey through cancer will be staged followed by a panel discussion/Q and A session and a wine reception.

The plays were written by Nell Dunn and a snippet from a review in the BMJ reads as follows: 'Five personal histories of pain, hopelessness, hope, resignation and love are the ingredients for Cancer Tales. There five real stories take us to to real problems. The monologues and dialogues are brilliantly written, transporting the audience into the minds and the lives of the characters.

The set is minimal, the play mesmerising' Both Nell Dunn and Trevor Walker, the play's director, will take part in a panel discussion on emotion and communication in a clinical setting after the staging of the plays. Professor Chris Fowler will be chairing the panel and the TV and news presenter Anna Ford and Jed Mercurio, a doctor turned author and screenwriter of the accliamed television series 'Bodies' will also sit on the panel.

Registration is from 6:30pm and the event starts at 7pm, followed by a wine reception at 8:40pm. Tickets cost £10 (£5 concessions) and can be booked online at https://icex.imperial.ac.uk/exchweb/bin/redir.asp?URL=http://www.rsm.ac.uk/students/stg101.php It would be great to see you there!
Posted by Unknown at 21:43 No comments:

I thoroughly recommend an excellent edition of Radio 4's 'Word of Mouth' devoted to medical communication. It includes a lively discussion on the pros and cons of 'teaching' communication skills. Shockingly, most medical students emerge from medical school communicating less well than when they started, communication having become ritualised at the expense of sincerity.

The programme also includes a discussion on how pain is talked about. Is a 'menu' of pain words helpful or is it overly constraining? One patient, Elizabeth McClung, explained how she finds the medical repetoire of pain words very limited (stabbing, throbbing, burning, nagging, radiating) and unable to cope with patients' metaphors. There are no easy answers, but the programme is a thoughtful look at it all.
Posted by Unknown at 13:38 8 comments:

Nobel Textiles at the ICA 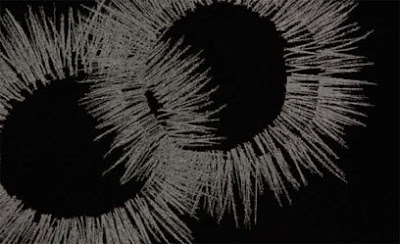 Five Nobel-winning scientists have been paired with five textile designers as part of a two-year project between Central Saint Martins College and the Medical Research Council, and the result is Nobel Textiles: a brilliant week of exhibitions and events at the ICA and in St James's Park.

Philippa Brock has collaborated with Sir Aaron Klug (Nobel Prize for Chemistry, 1982), responding with a collection of Jacquard weaves that explore the methods of transforming 2-dimensional weaving approaches into 3-dimensional models.

Carole Collet has collaborated with John Sulston (Nobel Prize for Medicine, 2002 with Sydney Brenner and Robert Horwitz), creating a collection of garden furniture based on the principles of programmed degradation.

Rachel Kelly has been working with Tim Hunt (Nobel Prize for Medicine, 2001), and has designed a collection of transparent wallpapers and paper lanterns responding to his discovery of cycling proteins which appear and disappear.

Shelley Fox has collaborated with Peter Mansfield (Nobel Prize for Medicine, 2003), and has created a fashion collection based on the MRI mapping of the body fat of 6 volunteers.

Rachel Wingfield has collaborated with John E. Walker (Nobel Prize for Chemistry, 1997), to create architectural scale textiles that explore urban food production, in response to John’s elucidation of the tiny motor that cycles energy in our cells.

Check out the details here for a series of associated events.
Posted by Beth Williamson at 19:09 3 comments: 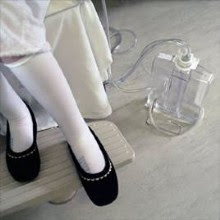 Transplant is a large-scale photographic sound installation that explores the experiences of transplant patients and the extraordinary issues raised by this invasive, last-option medical procedure. Showing this month at the Nunnery Gallery from Friday 4th September, it creates an immersive environment, weaving subtly revealing portraits and striking photographs of the hospital with intensely personal narratives, often recorded at the bedside, and sounds derived from the patients’ surroundings.
Photographer Tim Wainwright and sound artist John Wynne were artists-in-residence together for one year at Harefield Hospital, one of the world’s leading centres for heart and lung transplants. Working closely together, they photographed and recorded patients, the devices they’re attached to or have implanted in them, and the hospital itself. In this ambitious new work, Wainwright and Wynne investigate the boundaries between documentation and abstraction and search for new relationships between sound and image.
“Through all these differences and similarities of sound and vision, seeing and hearing, looking and listening, a rapprochement emerges in the collaboration. The insistent stillness of a photograph hovers in and out of the temporal movement of spoken language, but both add a powerful sense of human presence and individuality to each other,” said David Toop.
The exhibition will be accompanied by the publication of a book edited by Victoria Hume, manager of rb&h Arts, an independent charity within Royal Brompton and Harefield NHS Trust which made this project possible. Also entitled Transplant, the book contains perspectives on the artists’ work and on the wider issues raised by the project from a range of contributors including writer David Toop, critic Charles Darwent, medical researcher/writer Lesley Sharp, anthropologist Tom Rice, psychologist Claire Hallas and patient Kate Dalziel. The book also contains an exclusive interview with Professor Sir Magdi Yacoub, an interview with Tim and John by Angus Carlyle and a DVD by the artists.
The show runs until 28th September and is open Thursday - Sunday 1pm until 6pm. The Nunnery is at 183 Bow Road, London, E3 2SJ. Nearest tube is Bow Road on the Dirstict Line.
Posted by Beth Williamson at 09:22 2 comments: