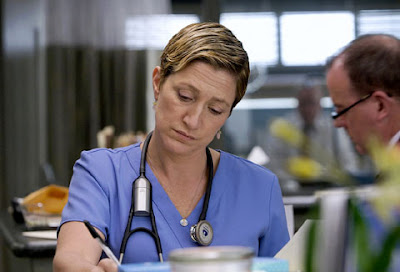 What to make of the new hospital series Nurse Jackie? Having watched the first week of episodes (thank you iPlayer! It's screening on BBC2 at 10 pm every night), it's hard not to feel rather horrified. Nurse Jackie is, in so many ways, inspirational. She acts in the patient's best interests. She subverts hospital bureaucracy whenever necessary, stealing from the bad to give to the more deserving. Unless, of course, the patient is a misogynist with diplomatic immunity, in which case she has no compunction is flushing his ear (sliced off by a prostitute he attacked) down the toilet. So far, so entertaining. But Jackie has a serious drug problem. She scores pills from her pharmacist lover, and takes them in a variety of ways -- from sprinkling them in her coffee to snorting up the contents of capsules.
The idea of a 'conflicted' health professional is not new. House has a drug problem too, along with brilliant clinical judgement. Why then, in Nurse Jackie so much more disturbing? Jackie is smart and sassy, and it is so refreshing to see a nurse in the prime role rather than another stereotyped doctor. But the message that Jackie gives is that it is not possible to cope with the job unless you have a pharmaceutical crutch. What sort of a role model is she?
There are plenty of cop shows on TV that show corruption, and we don't worry that these are serving as poor role models for aspiring policemen and women. Also, there is no shortage of doctor dramas that highlight character flaws in health professionals. So why do I feel so anxious watching Nurse Jackie? I think it is because we are seeing something new by way of character development, hinted at in House but fully developed in Nurse Jackie. Usually in TV dramas, you have clearly identifiable 'goodies' and 'baddies'. Over the course of a series, one type might turn out to be another, but almost invariably, character flaws are explicable in terms of someone's circumstances. The evidence of the first week of Nurse Jackie, however, plays havoc with the usual conventions of TV drama. Jackie has a lovely family: gorgeous husband and two adorable daughters. She is good at her job. And she seems entirely unconflicted by her frequent unethical personal behaviour. This may, of course, all come unstuck over the course of the series, but it's too late. We already love Nurse Jackie for her sheer chutzpah and her apparent ability to be in total control of her complicated life. Most tellingly, one would really want her on your side if you were a patient.
Medical students often tell me that they are inspired by House. But they do realise that House is utterly unrealistic, and most admit that they would not like to be his patient. For all its good writing and well researched medical interventions, House still comes across as a bit of a soap opera. Personal relationships unfold within a clinic that looks like a hotel, with little evidence of the demands of 'real' medicine. Nurse Jackie sets up greater intimacy with the viewer, using the Gray's Anatomy voice-over technique to impart wisdom. The bureaucracy in the hospital makes it feel more realistic, albeit in a rather superficial way. She is a far more sympathetic character than the gruff and misanthropic House ever could be.
Nurse Jackie will undoubtedly inspire more people to enter the nursing profession -- and that's good. We need more nurses. But we have to trust that people can distinguish right from wrong. Drug taking has no place in the profession, but this doesn't mean we should condemn a well-written, well-acted TV drama.
Posted by Unknown at 09:59 5 comments:

Brian Fies, writer of the award-winning Mom's Cancer, will be speaking at the Comics and Medicine conference. Brian is a pioneer in the use of the graphic novel to communicate about illness, and his book has become a classic. I'm really looking forward to meeting him. The deadline for proposals for papers and posters is 29 January: more information here.
Posted by Unknown at 09:49 1 comment: