Some dozen off us went to watch 'The Gabriels' on a very chilly Thursday evening. The Finnborough is a tiny theatre perched on top of a pub somewhere behind Earl's Court. We were a little disconcerted by a strong smell of fish as we ascended the stairs, but this turned out to be the actors' dinner -- eaten on stage: a touch of realism in what was otherwise a surrealist piece of theatre. Punctuated with biblical passages read by torchlight, the action takes place in a cottage where the atmosphere is as stormy inside as the weather is outside.

A lesbian couple's relationship is in crisis over the care of their cystic-fibrosis suffering son (whom we never meet). Coming to visit are a gay couple involved somehow in the in-vitro conception of the son, one of whom has throat cancer and the other is an advocate of scientific research railing against bad science reporting. (I couldn't help wondering how the anti-tabloid ranting went down with critics from said papers on press night.) The twenty-something prodigal son, from a previous marriage, brings his fundamentalist Christian girlfriend to stay, throwing the household into panic and neatly turning on its head the usual parent-child relationship: mother is horrified when they refuse to share a bed.

In the meantime, one of the lesbian mums is writing a futuristic graphic novel with a subplot about the dangers of cloning. This was cleverly done with the scenes framed as part of the backdrop and the action spilling over to the foreground every now and then.

This heady mix of gender politics, genetics, sci-fi and religion always teetered on the edge of chaos but somehow it never lost the plot. The result was a truly engaging, memorable play, performed by a very strong cast. Both sides of the cloning debate were forcefully aired -- interesting and refreshing to see a science issue at the heart of a narrative in which there were so many dramatic possibilities.

Unfortunately The Gabriels's run at the Finnborough has now ended, but I hope it will be resurrected elsewhere as it deserves a bigger audience.
Posted by Unknown at 17:58 3 comments:

'Meet the Robertsons' is a series of improvised dramas exploring personal conflicts and beliefs about health and illness within three generations of one family of Caribbean heritage. Each drama is followed by an audience discussion. The first of the series, in November 2005, received very positive feedback from all who attended including students, staff, healthcare professionals and community groups. To reserve your FREE place to next week's drama, email meettherobertsons@kcl.ac.uk or call 020 7848 8418 as soon as possible. Bookings must be reserved in advance and places are limited. For more information on these dramas and the issues they are tackling visit www.kcl.ac.uk/robertsons. Episode two:'Tania and Fabio': A drama exploring sexual health 25th January 2006, 13.00-14.00. Franklin-Wilkins Building, Room 1.10, Waterloo campus
Posted by Unknown at 17:05 No comments: 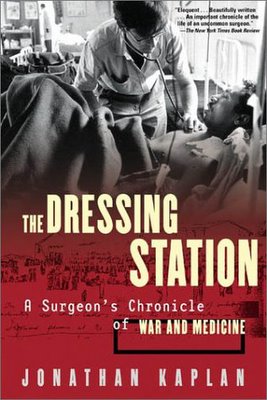 Kaplan's memoir is an interesting, gritty read. An interplay of history and politics form the background to which the surgeon applies his surgical experiences, which are vast and varied.

Kaplan is a descriptive writer with a flair for finding beauty in the gore of trauma; his passion for surgery shines through. He makes medicine look sexy and sound easy, and I think balances his enthusiasm with insight into the events around him which have led to the injury and bloodshed witnessed.

I was not always comfortable with Kaplan's views; his comments left me feeling that the surgeon too had his faults, and his short 'holier than thou' chapter conclusions might be better omitted. That said, the epilogue of the book reflects rather more broadly and 'works', being the end of the volume, where it seems rather more appropriate to consider the wider implications of his work.

Moreover, Kaplan's attempts at educating the reader on the circumstances of the situations he finds himself in are a strange mix of too much detail and too little comprehension: especially in terms of the geography, for which I felt maps might greatly benefit.

However, the author pitches his book at just the right level, his audience including laymen. His explanations of the medical conditions were apt and succint, oddly juxtaposed with the hazy perception of the political climate.

I felt a certain increase in laxity through the book, which I found pleasant: I felt I was getting the know the real Kaplan, who was slowly showing the reader more of himself, almost like he was realising it for the first time. He becomes more personal and puports his own view, rather than the general medical or ethical approach.

I felt sad for the surgeon during the book, when he reveals a colleague's drunken honesty (who believes Kaplan has amounted to nothing). It highlights the apparant futility in pursuing one's values whilst maintaining the other areas of life - Kaplan does not seem to have been able to hold down a relationship and his restless sense of adventure lacks stability and credibility in a professional sense on paper, even though it demonstrates a fierce strength of self-belief and confidence to strike out alone.

The Dressing Station leaves us feeling that we ourselves could not undertake the same struggles, and the reality of war, combat and conflict in the world. A dressing station is essentially a first aid base close to the front line; major cases would be unlikely to be saved and it would lack the resources to really make a substantial difference. Only those soldiers with minor injuries could be seen to. This metaphor represents Kaplan himself; one man doing what he can, struggling against a great tide, managing to hold back a few drops whilst great waves cascade around him. This melancholy take reflects the bittersweet nature of the novel, giving it a unique flavour.

Kaplan's second book is shortly to be published. What did other readers think?
Posted by aj at 21:51 4 comments: 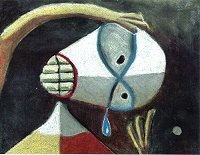 I started my Neurology firm today, with an interesting migraine clinic. Thrust back into the hospital environment from the cosy surroundings of General Practice some adjustment was needed. The consultations I witnessed boggled the mind; doctors interrupting patients (talking about recent bereavement) to ask about symptoms; goodbye 'Ideas, Concerns and Expectations', hello agenda and power. But oddly it worked. The consultant was so knowledgeable that the patients seemed to trust implicitly in him, and to realise he really was quite determined to get to the bottom of their symptoms and alleviate their problem, getting to shared management plans in a roundabout sort of a way.

Sadly cotton-wool General Practice made me forget just how impersonal and downright nasty hospital staff can be to one another, cue arsehole (female) registrar, who made it quite clear I wasn't welcome on the ward round, and that clerking a patient would totally obstruct said ward round. I was sent away but returned with colleagues for bedside teaching (hence the need to clerk a patient). So after waiting for thirty-five minutes, we bleeped the teaching reg: "Oh, I have a clinic today, I'll teach you tomorrow".

Alternative Medicine is a programme due to be aired at 9pm Tuesday on BBC2 about the therapeutic effects of acupuncture and the new scientific evidence that is emerging about this ancient practice forming a more solid argument for its wider use. The programme explores the history of acupuncture and its Chinese origins and demonstrates how the use of acupuncture in China is so mainstream that patients can undergo open heart surgery while fully conscious using this technique.
Posted by Taz at 22:12 7 comments:

The VS Pritchett Memorial Prize is worth £1000 for a unpublished short story of 2000 to 5000 words. More information and application details here.
Posted by Unknown at 16:12 No comments:

Last week I went on my first patient visit with the GP to see an elderly lady. She had recurrence of a throat cancer for which she had had a larygnectomy twenty years ago, leaving her unable to speak.It was saddening and fascinating to communicate with her: she made use of gestures effectively, and began by mouthing words, then writing on a pad. She also used a vibrating device against her throat which amplified the speech movements. I was able to understand a small amount of her speech, and fortunately the GP can understand her completely (and is the only one in the practice who can do so) but I felt best connected with her when she took my hand.

She had a mischevious sense of humour, telling jokes and buzzing her device to check if I was paying attention! (Her cat was pleased to receive guests and was rubbing around our ankles)
When she broke down I felt glad that simply touching was of comfort: there was little else I could say or do to make the situation any better.

The whole experience reminded me strongly of a piece by Deidre Scherer, who works in fabric and thread. It depicts an emaciated woman and her cat, and strongly signifies chronic disease and old age: 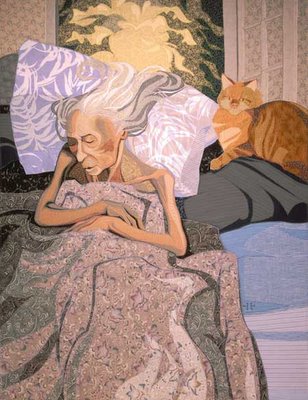 Some other pieces I noticed from the artist's website are The Last Year and Surrounded By Family which are also extremely thought-provoking.
Posted by aj at 13:56 3 comments:

A play by Australian writer Van Badham is currently showing at the Finborough Theatre. It certainly sounds ambitious: the plot combines science, religion, medical ethics and gender politics, all set within the graphic-novel genre. Tickets are £12, or £9 for students. More details here. There is a Purple Coat Club / Science Communication outing to see it on Thursday 26 January. Please e-mail me if you'd to join us.
Posted by Unknown at 09:57 1 comment:

The Purple Coat Club met last week to watch 'One Flew Over the Cuckoo's Nest'. The film takes the point of view of McMurphy, in prison for assault and statutory rape, who is referred to a psychiatric ward for assessment. McMurphy comes up against the emotionally-straitjacketed Nurse Rached who exerts control through regimen and infantalising the inmates. McMurphy is a renegade. He engineers a fishing trip for those inmates who are lucid enough to participate, providing the film with some fabulous comedic moments. Things get out of hand when McMurphy arranges a party complete with booze and girls. We all thought the acting was superb, especially Jack Nicholson as McMurphy and Louise Fletcher as Nurse Rached.

We wondered about the allegorical implications of the title. According to this website, it is based on the following nursery rhyme:

Vintery, mintery, cutery, corn,
Apple seed and apple thorn;
Wire, briar, limber lock,
Three geese in a flock.
One flew east, And one flew west,
And one flew over the cuckoo's nest.

McMurphy and Rached fly east and west, and it is actually the ostensibly dumb-mute Chief who flies over the cuckoo's nest. The book is narrated from Chief's point of view, and Kelsey sued the producers about this change to his story, amongst other liberties taken by the filmmakers. Apparently the film is also an allegory about east-west ideology with Rached embodying the Soviet Union. I guess this would have been more obvious in Cold War times (the film was made in 1975).

This is an excellent film which has enduring themes. For medics it raises questions about definitions of mental illness, modes of treatment and power relations within institutions.
Posted by Unknown at 22:17 1 comment: 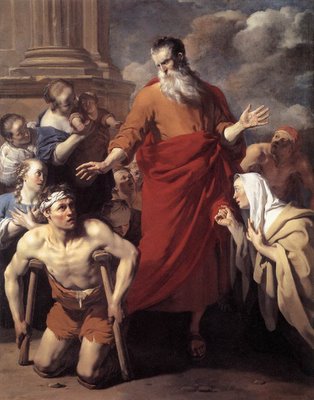 I was searching for a frontispiece to my 'patient project', a 3000 word case study on a patient with a chronic condition, when I found this rather nice painting from 1663.
It is entitled 'St Paul Healing the Cripple at Lystra', painted by Karel Dujardin.

The patient project aims to take into account community aspects of chronic conditions, and the interface between primary and secondary care.

I am finding my GP attachment to be a much more emotive part of medicine; counselling and communication skills seem paramount. Lots of trivial things but occasionally an eye-opener (which we are supposed to write up as a 'significant event analysis' - finally, some reflection in medicine!). Join the dark side...
Posted by aj at 20:25 1 comment: