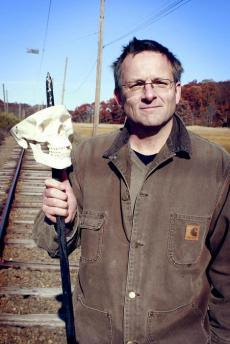 The BBC is showing an admirable commitment to medical history. Last year, there was a 30-part series, The Making of Modern Medicine, on Radio 4, doing for medicine what This Sceptred Isle did for the history of Britain. Last night, a new series started on BBC4: ‘Blood and Guts: A History of Surgery’. First up was a look at brain surgery.

The programme, presented by the engaging Michael Mosley, didn’t attempt to be exhaustive. It featured a few personal stories, mercifully sparing us from the ‘reconstructed by actors’ scenes that blight so many documentaries these days. I’m not usually squeamish, but Mosley demonstrating a transorbital lobotomy (basically hammering an icepick through the eye socket and rummaging about in the brain) was a ‘look away now’ moment. The well-meaning proselytiser of this hit-and-miss technique, Walter Freeman, travelled America in a camper van, lobotomising as he went. Even his son, who was interviewed, thought it ghastly.

Mosley tracked down one of Freeman’s victims, Howard, who at only 12 had been handed over for surgery by his evil stepmother. Howard gamely agreed to have an MRI scan – apparently the first to be performed on anyone with a transorbital lobotomy. ‘I feel so privileged to be here,’ gushed Mosley, momentarily conflating the act of looking at a map with the taking of the trip. There were two ominous lacunae in the parts of his brain associated with impulse control. Howard looked bemused at being told by Mosely what a fantastic individual he was. It’s like being told you’ve been improved by having a hole in the head.

Noevertheless, the minor irritation of Mosely’s sycophancy aside, this is riveting TV. It’s a risky business being a documentary presenter these days. You’re expected, Blue Peter style, to proffer yourself up as an experimental subject. Mosely had his brain electricity interfered with to demonstrate brain geography. It will be interesting to see if he survives the six-week series undamaged by modern medicine.

Meanwhile, Lord Winston takes to the screen again tonight in Superdoctors on BBC1 at 9 pm. This three-parter looks at frontier medicine – using new technology to supposedly enhance medical interventions. From his interview on R4 this morning, it doesn’t sound as if he’s been convinced.
Posted by Unknown at 11:48 No comments: