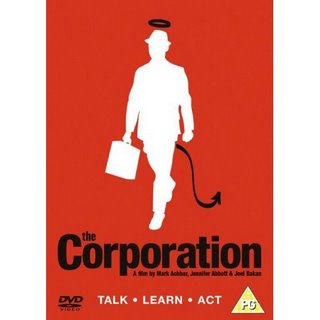 I've just watched this unsettling documentary about the role and power of corporations. I was interested especially in the idea that the corporation is seen in the law as an individual, thus granting it the rights to buy and sell, for example.

The documentary held the idea of a corporation as an individual accountable for its actions, and in doing so diagnosed it with a personality disorder under the ICD 10 and DSM IV classifications, used by psychiatrists worldwide. By creating a list of personality features, the filmmakers dubbed the corporation individual a psychopath. Despite this being a legal term, it correlates most closely with what is identified under the ICD (International Disease Classification, as organised by the World Health Organisation) as an Anti-Social or Dissocial Personality Disorder. Features include a lack of empathy for others, a lack of accountability for one's own actions and manipulative strategies to further oneself.

The documentary used a number of medical, social and biological methods to investigate the corporate entity, which proved interesting and systematic.
Posted by aj at 23:01

I've read about individual phsyco in corporation. Very interesting? but unfortubately I do not remember the author.